Haha it worked!
Okay before I even begin to talk about this persona I have to give a ginormous thankyou to blackestbird for creating her. Without her amazing ideas, this pony would never have come to life. I tweaked and tweaked this pony and blackestbird was never satisfied until I was. Thank you so much!

Alright so here's the idea behind the pony... It's a blend of the things I love. Hockey is one of my biggest passions in life, but I live in a state with 90 degree weather and hurricanes... not frozen ponds and snow storms. Living in Florida has brought me sun and sand and surf, I happen to love the surf the most. I love the carefree feel of tropical islands and sitting out on the ocean perched on my surfboard, waiting to catch a wave. But even more than that- I love my summer trips up to Buffalo where I get to see my family and be surrounded by the hockey atmosphere. I love the energy of going to hockey games with my boyfriend. The game of hockey is a huge part of my life right now, and will play an even larger role in my future. I want to someday work in the NHL somehow, whether I design jerseys or make opening videos, only time will tell. It is the coolest game on earth, if I do say so myself and I love no team more than the Buffalo Sabres.

After giving it some thought, I wanted to name this pony something that described the hot and cold contrast of these two parts of my life. I didn't want to be cheezy and name it Ocean Puck or something like that.
I settled on Tropical Ice... I think I'm happy with this name. Although I'm still open to suggestions.

Anyway, here she is... My lovely pony persona:

And here are the amazing symbols blackestbird made for her:

I absolutely adore these symbols. The hockey sticks sort of bring the tropical element to the Sabres "slug" symbol. The brown gives it all a tiki-ish look, I think.


Here's what blackestbird had to put up with before we got to the final pony:

Ponyfan
Thank you miss for my avatar. My Wish List

Awww you're a sweetheart ^.^ I was so happy to help you with her hun, and I so glad you love the final result so much. You write up such a nice bio too ^.^

I like the name Tropical Ice. I don't had any suggestions - I'm pretty rubbish at names. But I think you picked a really good one.
[SIGPIC][/SIGPIC]​

Thanks SDS for my av. Thanks Dizziness for my sig.

Awesome.... I love her! Wonderful wonderful job on the symbols, blackestbird! 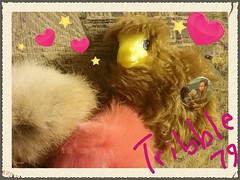 Awwww Beth she is GORGEOUS and how CREATIVE of you! I love the name, I love the design, love the pony!


That's one beautiful persona you have!

Heaven aint Got a Vacancy then we just GET UP AND GO!

Thanks to Crystal_Lace for my beautiful sig!
​

Nannerslug said:
Awesome.... I love her! Wonderful wonderful job on the symbols, blackestbird!
Click to expand...

Thanks SDS for my av. Thanks Dizziness for my sig.

Thank you everyone!!!
[SIGPIC][/SIGPIC]
Thanks to Pop Girl (av!)
divas=

Well... I decided my persona needed a little boyfriend.

He does not have any markings yet, I'm not exactly sure how they're going to look and I really can't make them myself when I do figure it out.
He's just inspired by my own boyfriend in every way.

He's orange because that's Andrew's favorite color, and the rest comes for his favorite hockey team: the Florida Panthers. Hooves and hair are a navy blue -mane has a gold streak, and his legs have a red gradient. His eyes are supposed to be an olive-y hazel.

Definitely a work in progress. I'm pretty sure that's his final color scheme, but we'll see.

At some point I want him to have headphones with a mic.
[SIGPIC][/SIGPIC]
Thanks to Pop Girl (av!)
divas=

Awwwww what a cute couple! I love his color scheme, actually they really match like perfectly together! Awesome job you did on creating him hun!

Heaven aint Got a Vacancy then we just GET UP AND GO!

She looks awesome, thebeth! It great that you were able to incorporate two such different themes (the tropicalness of Florida and the coolness of hockey) into such an awesome symbol. Tropical Ice is a good name for her.

On a side note: Nannerslug- that is an awesome sig picture! I LMAO!
[SIGPIC][SIGPIC]
Sig courtesy of LLBPonyGirl​
P

Niiiiice! I wish I had personas
[SIGPIC][/SIGPIC]